This week, something happened that I’ve been aching to see for some time. It was true leadership. It was someone with the courage of conviction, standing up, (literally), in the face of those who oppose him. But it turns out, he also stood up and called out those who are supposedly on his team.

Texas senator Ted Cruz did an extraordinary thing this week. According to Senate rules, a senator may control the floor for as long as he or she is able to stand and speak. Though it technically wasn’t a filibuster, the rules of one applied. That means he was required to stand the entire time, was not allowed to sit, lean, use a chair in any way, nor eat, drink or use the bathroom. They must basically speak continuously the entire time.

I’m not going to go into a civics lesson or anything. The point is, it is physically demanding. Senator Cruz held the floor of the senate for 21 hours, 19 minutes. The point of this extraordinary measure was to draw attention to his opposition of ObamaCare, or, the Affordable Care Act. Not only his opposition, but that of a majority of Americans. Certainly those he represents in Texas.

During and after Cruz’s extended floor speech, colleagues from both sides of the aisle criticized him. Those opposed to his views attempted to brush off his commentary by calling him an anarchist. Even some who supposedly share his views criticized him. They felt that his tactic was, “a waste of time”, that it wouldn’t change anything.

But here’s the thing. To those of us who are sick and tired of the status quo of political blowhards in both parties, this act of courage resonated with millions and millions of Americans. We are screaming out for leadership. We are crying out for someone to stand up and refuse to go down without a fight.

Passion and conviction. Dying commodities, it seems. Yes, maybe the outcome will not be affected by Ted Cruz’s speech. But what has happened is the status quo has been served notice. If those who have held positions in the Senate for decades got their feelings hurt by being called out for not fighting hard enough, GOOD! If “leaders” of the Senate Republicans were bent out of shape because a freshman dared to speak up without their blessing, GOOD! True leadership doesn’t create dependence. It enables and empowers INdependence!

America is crying out for leadership. We are aching for someone to stand up and fight the good fight. Rather than acquiesce and give in to defeat, we are desperate for someone to make their voice heard, even if it ruffles some feathers. We’re looking for someone who shares our views who will not fade silently into the night. That’s not who we are. We’re tired of being represented by people who are more interested in their own image, popularity, power and prestige.

I love the movie Braveheart. Though it’s based on a true story, it’s largely fiction, I know. But the movie still moves me. The passion of one man who is willing to die in order to achieve something for which he is passionate. He is confident he will not live long enough to see what he’s fighting for, but he fights anyway. That inspires me. I end this post with a scene from this movie. It completely summarizes the point I’m trying to make. America needs TRUE leadership!

As we all reflect upon the events that changed the world forever, I find myself longing. Many long for the world we had on 9/10. We could go meet loved ones right at the airport gates. We weren’t worried about the government reading our phone records or our internet activity. We could go to sporting events and amusement parks without having our bags rifled through, or even banned.

For me, I long for 9/12. On that day, we were Americans. We weren’t divided by political

How far we have drifted.

In our darkest days, I saw the best in us. Tragedy struck, and we responded beautifully. Just as one hand reaches to the the aid of a thumb accidentally struck by a hammer, we reached out to one another in an effort to comfort and aid the suffering. We found ourselves applauding and honoring the first responders in our communities when it dawned on us that they are the ones running into the very crisis the rest of us are running from.

Tragically, we are so far removed from our best days. I’m sickened by the divisive tones we take against one another. We are so disagreeable. We argue over things that, in the big picture of life, are so trivial. We have become so selfish. If one disagrees with another, it’s because they are a bigot or a racist. We level ad hominem attacks against our brothers

and sisters without respect for their feelings, their life stories, or even any facts. The same people we stood with, shoulder to shoulder, waving the Stars and Stripes, singing God Bless America without worrying about the so-called separation of church and state.

What our enemies meant for evil, good came from it. But now, we are more divided than ever. I dread that it may take yet another catastrophic event to bring us back to a place of humility and unity.

Will we ever learn? 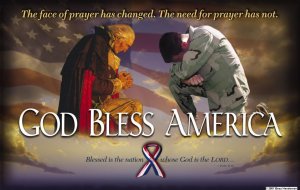 “It’s not meant to be. Look at all the obstacles.”

I have seen far too many people give up on something by caving in with that way of thinking. We sometimes see obstacles as being detour signs. I’m not sure why we expect that God’s will is going to be paved in cashmere with free pizza and your favorite beverage all along the way.

The pathway to God’s will is going to be challenging. By definition, our journey is going to test our faith. It is going to require us digging in, fighting our human tendencies to lose faith. I believe that adversity is God’s way of showing us just how important our dreams are. If they’re not worth fighting for, then they’re not that important to us. If our dreams, if pursuing God’s will for us is really, truly our passion, there is nothing that will keep us from it.

If you’ve ever been at, or watched a track meet, you may have seen a hurdles race. You may have even stood next to a hurdle. They are challenging, for sure. Even the best runners get tripped up from time to time. But the thing is, the purpose of hurdles is not to stop you. They are there to be jumped over! They’re not meant to be easy. They should be difficult to get past. But to reach the goal, you will have to go over them.

Years ago, my parents sold their home and most of their possessions in order to move to Costa Rica to start a ministry there. Whether it was governmental red tape, or outright dishonesty and thievery, they met many, many obstacles along the way. It literally lasted the first two years they were there. Uncharacteristically, my dad confessed to me that he was beginning to question whether they had made the wrong decision in going there. In a moment of spiritual clarity, I let him know that what they were doing was of spiritual significance. That means they were in the devil’s crosshairs. If what they were doing was a mistake, he would simply let them go on their merry way. He wouldn’t put up any interference.

I think of the life of Joseph in the book of Genesis. After all his brothers put him through, he had a heavenly perspective. When his brothers ultimately and humbly threw themselves at his feet in guilt and grief, Joseph said in Genesis 50:20 You intended to harm me, but God intended it for good to accomplish what is now being done, the saving of many lives.

Are your dreams worth fighting for? Is God’s will important enough to you that you’ll deal with any obstacle that comes your way? No matter what anyone else says or does, do you have the conviction and faith to stay the course? Do you have a heavenly perspective?

Be strong and courageous. Do not fear or be in dread of them, for it is the Lord your God who goes with you. He will not leave you or forsake you.” -Deuteronomy 31:6

There are times in our lives when we find ourselves in ruts. Life can get mundane. You don’t know how or when you got there, but when you fan away the fog that clouds our vision, we can see we’re definitely in a ditch.

It is so important to have dreams and goals. Do-able ones. Whether it’s visiting an exciting place, or just planning a get together with someone special. It doesn’t change where you are in the moment, but it suddenly changes your focal point.

Nearly three years ago, I wrote this post about focus. When we set goals, it’s important to be focused on them, and not the things that fight to distract us. However, we must still keep sight of the things that we can do today that will make the dream a reality down the road. There are always incremental steps to take. For me, when my heart and mind are set on something, I’m relentless. I absolutely need to do something, anything, each day toward that end. Some days it may only be a tiny thing. Other days, quite significant. But something everyday.

As I write this, it is Labor Day. A day off from work. It’s tempting, and even necessary at times to relax and do nothing. And to a great degree, that is what my day will be, relative to a typical Monday. But that doesn’t mean that I will not do something toward my dream. God has blessed me with a vision of what my life will be like in the not-too-distant future. If I sit around waiting for that day to come without preparing for it, I will either delay the dream, or I will be grossly unprepared for it. Maybe both. Or maybe, the dream will die from neglect.

For some time, I have been in a rut. A pretty deep one. It happens to all of us. As the saying goes, you don’t drown by falling into water, but by staying in it.

In a rut? Feel like you’re in a ditch with no way out? Remind yourself of a goal you once set. A dream. If you don’t have something, come up with something! A day trip. A vacation. Take a class. Save up to buy yourself something that will make you happy. Whatever. Give yourself something to look forward to. Something to work for. Then, take one step, then another and another. Before you know it, that rut will be well behind you, and you’re back on the road, headed in the right direction.