I remember watching M*A*S*H growing u 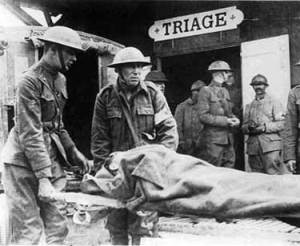 p and hearing a word they always used that took me some time to understand.

Just by continuing to watch the show and figure out the context, it was always used when they had mass casualties. They had to go down the line of patients and determine who could wait for surgery, who needed to be in surgery right away, and who was unable to be saved.

Today the new iPhone 4S is available at stores. As a Verizon customer, I’ve been dealing with phone envy since the first iPhone was released over 4 years ago. I chose to stay with my carrier and patiently wait for the device to come to Verizon. I thought that would happen early in 2010, but no. Then it finally was announced that it was coming to Verizon, but halfway through the cycle of the iPhone 4 in 2010. I figured I’d wait until the traditional June release of the newest version in 2011. Then it became clear that it wouldn’t be June, but later in the summer. Then it was September. Then October. So now, it’s out.

What does this have to do with triage? Well, as life goes, my transmission on my car

I’m not the most patient guy in the world. It’s almost as if God knows this about me. It’s almost as if He is purposely allowing me to be in situations where I have to grow up and be responsible, or go about my own way and create even bigger problems.

What can wait? What needs immediate attention? What am I holding on to that needs to die?

11 No discipline seems pleasant at the time, but painful. Later on, however, it produces a harvest of righteousness and peace for those who have been trained by it.  (Hebrews 12:11)