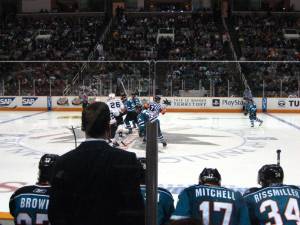 Tonight I am going to experience one of my great spectator passions, an NHL hockey game. I discovered hockey relatively late in life for a guy who loves sports. I actually went to my first hockey game at the Cow Palace in San Francisco when I was about 14 years old. I saw the San Francisco Shamrocks who only existed for two seasons. Actually the league they were in, the Pacific Hockey League, only lasted two seasons. I remember repeating one simple phrase numerous times throughout the night as I sat in amazement of what I was watching.

They can do that?

I was blown away by how physical the game was. The hits these guys put on each other at such high speeds. The way they whacked each other with their sticks. The fights. It was AWESOME! As a fun addition to keep the theme going, I’ve put a hockey song here on my blog page. (Facebookers, click on the link just above the comment box below to go to the original post to hear it and see other features on my blog page, if you like).

So tonight, I’m going to a hockey game. With this as a theme, I want to tell you a little bit about my friend who has been nothing short of an enabler in my passion for the game. Let’s just say he’s something of a mucky muck in the San Jose Sharks organ-eye-zation (as the Canadians pronounce it). Out of respect of his privacy and character, I’m only going to share his initials. I know this guy fairly well, and I think you’ll understand a little better as I go on why I’m not mentioning his name. Many of you will read this and know who I’m talking about, and that’s fine. If you know him, you already know what I’m about to share from your own experiences.

For the rest of you, I want to introduce you to my friend KC. KC is a guy who has worked hard throughout his life. I don’t know a lot of details about his life except for what I’ve read because he’s not really one to talk about himself or his accomplishments. He’s much more comfortable listening to you and what makes you tick. KC knows everyone. I like to jokingly remind him to never let his cell phone out of his sight because his address book has a who’s who of names and contact information. Hall Of Famers, politicians, CEOs, bazillionaires…you name it. I’m really warning him not to leave me alone with his cell phone because I’ll start digging through it and calling some of these guys up!

How did my Forrest Gump-like path cross with a guy like this?

For several years, KC and I attended the same church. Before I had any clue about his professional background, I knew him as an usher and Sunday School teacher. He knew me as a singer. He was just an ordinary guy. He loved talking with the junior high and high school kids about their football games from the night before. He loved talking about golf. He loved just being one of the guys. After all, that’s who he is.

(Yeah, one of the guys who can buy and sell me about 10 million times over.)

If I were to sit down and tell you about the people who have been most influential in my life, they all are different. Different backgrounds, different ages, different financial situations and such. But they have one common factor, though it manifests itself in different ways. They all have qualities I admire and aspire to acquire. Ha…I just had to phrase that sentence that way. It made sense, and rhymed in an annoying fashion. Bonus!

What I love about KC is that despite who he knows throughout his professional and personal paths, he is not one who is impressed with status. When we’re at a game, eating a teriyaki bowl, sitting down to breakfast at Hobee’s, talking on the phone, or whatever, he’s completely engaged in our conversation. He’s not looking at his watch and cell phone sending signals that he’s eager to move on to something or someone else. As an usher, he was not too proud to look people he didn’t know, and who didn’t know him, right in the eye, smile and welcome them while escorting them to the best available seats in the auditorium.

It’s a powerful and empowering quality that you don’t see to such a degree in people very often. I have no problem being humble because I’m a big dork. If I ever start to get too big for my britches, I have hundreds of people who will be more than happy to remind me of my impressive level of dorkosity.

I see Jesus in my friend KC. While God is the Creator of everything, the One who is timeless, the One who has power over death and the grave, the One who deserves a level of praise we can’t even begin to satisfy, much less understand…He knows my name. He knows the number of hairs on my head (which isn’t the task today that it once was). He knows the desires and dreams in the secret corners of my heart.

Through my friend KC, I realize how much greater it is that God is not too busy to spend time with me and listen to me. He’s not more interested in someone else who is more important that He won’t send me a love note to remind me that I’m on His mind. You see, in this life, we’ve got the philosophy backwards.

It’s not who you know, it’s Who knows YOU.