Every year at Christmas and birthdays, I would absolutely agonize over what to get my mom. She was impossible to buy for. Not because she was picky and tough to please, but because what do you get someone who spends 95% of her life in bed? A blanket? New pajamas? She doesn’t wear all the ones she has now!

Today, my dad called me because one final task 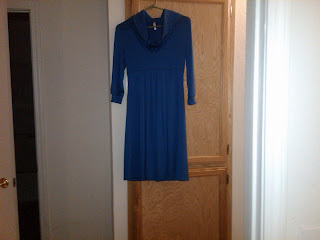 needed to be done for her.

She needed a dress.

I went to Nordstrom Rack to find something that I thought represented her well. She hasn’t needed a dress for anything for years. Her body was so tiny at the end, anything that would have been in her closet from those days would have practically held two of her.

I found a dress which I think symbolizes the woman she was. It’s a simple dress, but oh so beautiful. The fabric is soft and stretchy, much like she was. She was so gentle, yet so flexible. She was graceful in any situation. Back in October for her birthday, I wrote about the time she took me to the race track to watch stock car races. That wasn’t her scene at all, but you’d never know it by watching her enjoy doing something her son would love. She cheered from every sideline as I participated in sports. She sat proudly to listen to me sing.

Whatever the occasion, she adapted beautifully.

The dress, as you can see, has long sleeves and a high neck, as she requested. In all things, my mother was modest. Even in her prime, she never wore anything or did anything to distract or draw attention to herself. Oh sure, there was the time she went into Burger King and ordered a Jumbo Jack, but I assure you, that was Mom at her best. She was funniest when it was accidental.

The woman couldn’t tell a joke for anything. She had a limited repertoire, but she had a few doozies she had committed to memory. For your enjoyment, I share with you a couple she loved most.

We’re going to have a beebee.

Why did the elephant stand on the marshmallow?

So he wouldn’t fall in the hot chocolate.

You didn’t laugh so much because they were funny, but because in her own way, her own cuteness, her own comedic ineptness, she was hysterical.

Back to the dress.

While understated, it’s elegant and classy. That very much described my mother. She didn’t have flashy jewelry, but she didn’t need it. She had an elegance which only made everything else that much more beautiful.

This last dress was an honor for me to buy her. This last dress is my final tangible gift to this beautiful woman. The cool thing is, I know she’d like it.