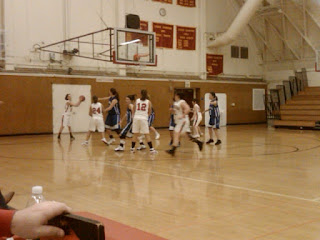 Saturday was a really great day for me. There is a family back in San Jose with whom I have been very close for many years. For the past several years, this part of the year has been largely occupied with girls’ basketball games. We started out by coaching Troy’s daughters when they were in elementary and middle school, and took secondary roles when they entered high school. There was no way we could simply be spectators…we’d go insane.

Troy and Marlo’s eldest daughter, Brittany, is now in college, but the younger, Alyssa, is a junior in high school. Alyssa’s games are typically on Tuesday and Thursday nights, so it’s virtually impossible for me to make any of her games. I have missed only a handful of her games since she was little, so this year has been quite an adjustment for me. But I knew she had a Saturday game in early January, so I circled that bad boy on my calendar a couple months ago.

That day was untouchable.

The game was at 3 pm, so I got there a little early to see the coach and spend some quality time with Troy. It was just like old times. Like we just saw each other earlier in the week. It was just nice. Right before the varsity game started, the head coach told the guy who took my place at the scorer’s table to instead take video of the game, and let me take my normal place at the table running the shot clock for the game. It was very sweet of her to let me do that. She told me after the game that anytime I happened to be in town, the job was mine. I have to admit, it’s a silly thing, but it meant a lot. It made me feel like I’ve contributed just a little something in the past several years.

After the game, Troy, Marlo, Brittany and I all went to dinner. Alyssa had a team function that evening and couldn’t join us. She was genuinely disappointed that she couldn’t hang out with us, which was rewarding to me in its own way.

These girls are very special to me. They never treated me like “dad’s friend”, but like family. Even as they got older and too-cool-for-grown-ups, they always showed appreciation that I participated in their lives and cared about them.

Brittany and Alyssa have had it pretty good, compared to many of their peers. In just about every game either of them have ever played, going back about 10 years, they’ve had a minimum of 4 or 5 family members in the stands rooting them on. About 4 years ago, when Brittany was in high school and Alyssa was still in middle school, we had to plan some strategy. Many of their games were on the same nights, even at the same times. But we couldn’t be at both places at the same time. So Troy and I would make sure each of the girls had some family representation at their games. Then, in between periods of the games, Troy and I would text each other with scoring updates from our respective games.

I don’t have the words to tell you how special it is to get together with great friends who have been such a huge part of my life. Even after over 5 months of separation, we picked up right where we left off. I miss my friends…my family, but no amount of miles can deteriorate the bond we’ve built over the years. I’m very blessed. And while I miss these very special friends, God has been good in placing good people in my life here in my new home. No one and nothing can replace the relationships I built in San Jose, but I’m thankful that God has surrounded me with such great people wherever I go. In fact, there is no need to replace anything because, in reality, I haven’t lost anything.

I’m a very blessed man. I believe you can tell a lot about someone by the people who love them. When I consider the quality of people who willingly call me a friend, I’m humbled. I have an embarrassment of riches when I look at the special people in my life. The man I am today, and the man I am still becoming, is a composite of the wonderful people who have blessed my life with their friendship. It’s a pretty special thing when you can look in life’s mirror and see the people you love in the reflection.

One thought on “Girl’s Basketball and Good Friends”