“The greatest trick the Devil ever pulled was convincing the world he didn’t exist.”

We are now entering the “Holiday” season, which also means we’re entering the season in which “Christmas” comes under attack.

ign on local buses in Washington DC stating, “Why believe in a god? Just be good for goodness’ sake.” This campaign will run from mid November through December.

Why now? Why during this time which is so sacred to the estimated 2.1 billion Christians (and their variations) around the world? A spokesman for the humanist group gave an explanation about the timing, saying, “We are trying to reach our audience, and sometimes in order to reach an audience, everybody has to hear you.” He went on to say, “Our reason for doing it during the holidays is there are an awful lot of agnostics, atheists and other types of non-theists who feel a little alone during the holidays because of its association with traditional religion.”

Am I supposed to feel sorry for them? They feel alone?

Christmas has become so secularized, there is no resemblance to its Christian meaning. This argument is so incredibly misleading, it would be comical if it weren’t so evil. This isn’t about making atheists and agnostic feel less alone. It’s about eliminating the sacred meani

ng of Christmas. I could almost respect them if they were at least honest about it.

When the United States was fighting for 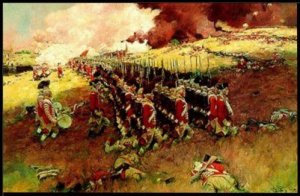 independence during the Revolutionary War, our enemy was easy to recognize and fight because they wore bright red coats and marched in straight lines. Today, terrorists disguise themselves as civilians, and even using women and children as suicide bombers. In the war against Christmas, and Christianity, our enemies disguise themselves as victims, as disenfranchised, as compassionate, seeking love, peace and harmony.

If someone truly believes there is no God, they also must believe there is no devil, which is why I began this post with the quote from Charles Baudelaire. A British humanist group recently put the following slogan on buses in the UK,

During the Presidential campaign, it was evident that there were at least 40-45% of people who were resolute about who they supported. The “battleground” was for the 10-20% of “undecideds”. The people these humanist groups are after are not those who are solid in their faith. They are after the spiritual “undecideds”. By compelling their emotions with words like “worry” juxtaposed with “enjoy”, they hope to take the attention from the very troublesome concept of their opening sentence, “there’s probably no God.“

Probably? You’re not sure? Hmmmm.

If you are someone who believes in the real meaning of Christmas, it’s time to stand up. There is a real and present danger threatening to eliminate something which is sacred to you. No, not Christmas. That is simply an easy target. They’re trying to eliminate Christianity.

If you don’t believe there is a God, let me say something. If you’re right and I’m wrong, what’s the worst thing that came of it? So many have overcome addictions, restored their marriages and families, found peace in their lives, found freedom in prisons and found meaning in their lives in a world which otherwise overwhelms them. So many have found deliverance from the “worry” you think we walk in, and instead live with pure joy.

But what if you’re wrong?

You better be right. You’re betting your eternity on it.