I hope your weekend was nice. Mine was good. Pretty much the perfect blend of activity and rest.

Friday: As you can see from the post below, I went and played Bingo Friday night. You can see the glimmer of hope in my post as it was still relatively early in the festivities. Yeah…I didn’t win anything. I came close. I only needed a single number on several occasions, but I’m sure someone with a little Buddha statue and their lucky stuffed aardvark beat me out for that elusive winning number.

Saturday: Got up in the morning and went out looking for garage sales. This really serves two purposes. One, of course, is the possibility of finding stuff you need and want for dirt cheap, but it’s also a great way to learn the lay of the land. I enjoyed driving around and checking out the neighborhoods and even some surrounding towns. Just for grins, I also drove down to Sacramento just to drive by the Capital building. Yeah, I know. Hokey. But I had never been by it, and what the hey…I had nothing else to do. Spent the evening at home, watched a Netflix movie, (The Kingdom – goooood movie).

Sunday: This day started last Monday, actually. As I wrote earlier in the week, I was asked to do my first solo at Sunset Christian Center. So from the moment I picked up the recording and the sheet music, I listened to almost nothing else for the rest of the week. From the moment I woke up yesterday morning, a good 2 hours before I needed to be at sound check, I hit the remote control and began listening to the song. I had it on repeat, so it just looped the song over and over (and over and over and over…). Sound check went pretty well, and I felt much better about things than I did on Wednesday after rehearsal. The song went very well in the service, so it was a real answer to prayer to get through it with my reputation and dignity still in tact. In all seriousness, I had a lot of people praying for me, and I’m ever-grateful to each of them. Thankfully I was unaware as I sang that Dr. George O. Wood, General Superintendent and over all Queso Grande (not sure that title is actually on his business card) of the Assemblies of God was in the house. As if I didn’t have enough on my mind. Thankfully, God spared me of that detail until after I was done singing.

Last night I checked out Axis, the youth night service at SCC. Pastor Kyle Bethke and his wife Marcia are doing an absolutely amazing job with these kids. They have an incredible facility where the kids can come and socialize, play games, listen to music and enjoy some food and drinks before the service begins. The energy in the room was incredible. It was like, well…a group of hyped up teenagers happy to be where they were. I didn’t see one kid who had the look of my parents made me come here. Then, with just minutes to go before the service started, 2 huge roll-up metal doors began to lift, and the kids poured into the room where the service would be held. Then, a 2 minute warning video came on with a countdow 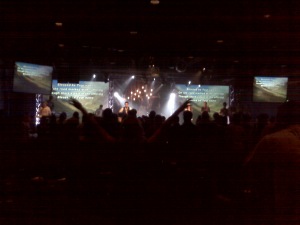 n clock signifying when the service would begin. I was blown away by the genuine enthusiasm and anticipation the kids had. When the clock hit 0:00, the band, made up exclusively of students, began to crank out some great music. There were ten kids in the band, and they were awesome. This wasn’t some teeny bop thing you see on the Disney Channel. It was some serious music played very well! The kids in the audience crowded the stage and worshipped! No, not their friends in the band, but the God who made the band!

Over all, it was a great day. A long one, but a great one. Every single person I’ve met at SCC, from all age groups, have been very friendly, very supportive, very warm. I think I’m beginning to see why God gave me this assignment. And I’m loving it!